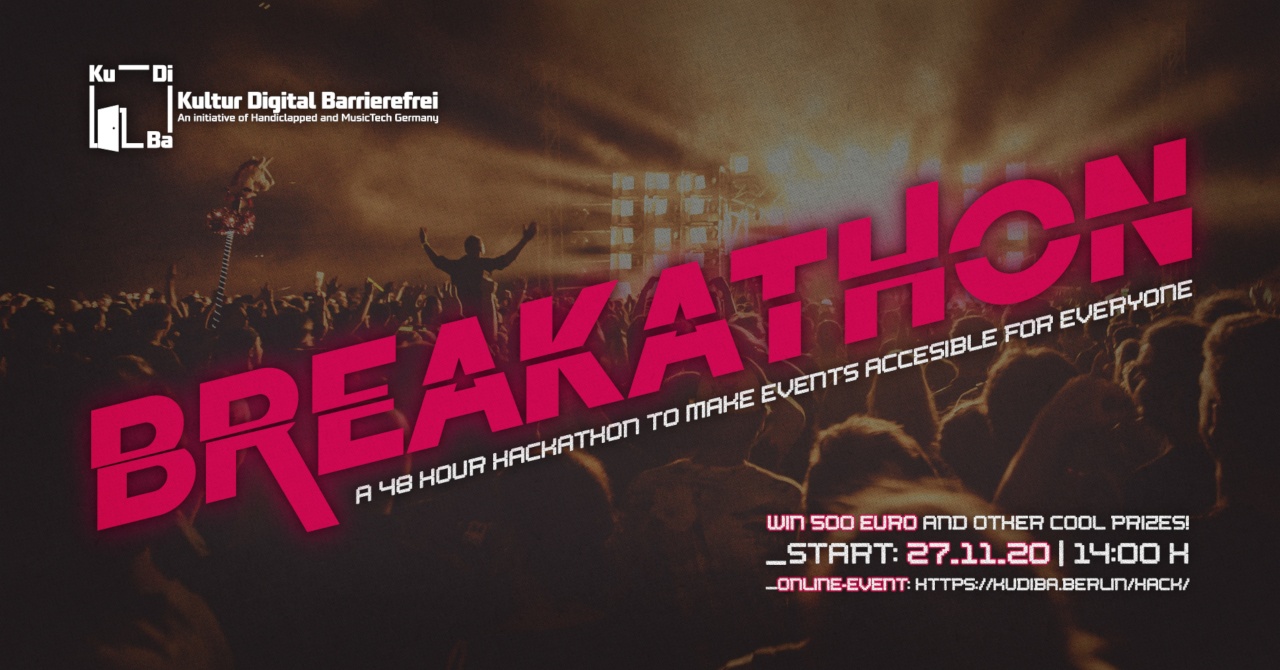 KuDiBa tears down barriers in the live sector of the cultural industries.

“Kultur Digital Barrierefrei” is a joint initiative of Handiclapped-Kultur Barrierefrei e.V. and MusicTech Germany e.V. with the goal to improve the accessibility of cultural events for handicapped people. On November 27, at the first inclusive online hackathon, developers and designers will develop prototypes for digital aids in order to break down existing barriers to access cultural events. The results will be presented on December 3, the “International Day of People with Disabilities”.

As a result of the corona restrictions imposed by the German government, no cultural events can be held in public at the moment. This leads to an extremely precarious situation for the entire industry and threatens a large number of livelihoods of those working in the cultural sector. The situation is terrible but can also be used to rethink existing structures and improve the overall infrastructure. The ongoing digitization has made access to cultural events easier for many already. But people with disabilities, which are 10% of the population, still have to overcome numerous obstacles in order to be able to participate. This applies both to performing artists and to the audience.

This is where the KuDiBa project comes in. It aims to make existing barriers visible, collect, and present already available resources, and to develop new solutions. On November 27, developers, designers, and people from the cultural sector will come together for the first inclusive online hackathon. The goal is to develop prototypes for digital tools on an open-source basis in 48 hours. Originally planned as an in-person event in Berlin, the hackathon will now take place online due to corona restrictions. The challenges to be solved are based on the needs that were identified in a survey with the target group. Many cooperation partners from institutions that work with handicapped people have helped with that.

Programmers, designers, and other interested people, with and without special needs, are invited to participate in the Hackathon. Everyone can register from today until November 21st, using this form. Apart from making a lasting contribution to a greater diversity of the cultural landscape, the winning teams additionally receive a mix of cash and prizes, too.

Just in time for the “International Day of People with Disabilities” on December 3, all available resources will be released in a guide for “Organizing and Producing Accessible Events” which will be made available free of charge on the project’s website. The initiative intends to help people who work in the cultural sector and organizers of concerts, theater plays, and dance performances to implement those measures without great effort to make future events as accessible as possible, both online and offline. Last but not least, if culture can be experienced by more people, this previously neglected, large target-group will also contribute to revenue streams in the cultural sector.

The project is funded by the Berlin Senate Department for Culture and Europe as part of the program “Digital Development in the Cultural Sector”.

Join the hackathon and register here!
Register
Copyright 2020 Handiclapped-Kultur Barrierefrei e.V. und MusicTech Germany e.V. All Rights Reserved
Font Resize
Contrast
This website uses cookies. If you continue to use the website, we will assume your consent.OK
Click to listen highlighted text!